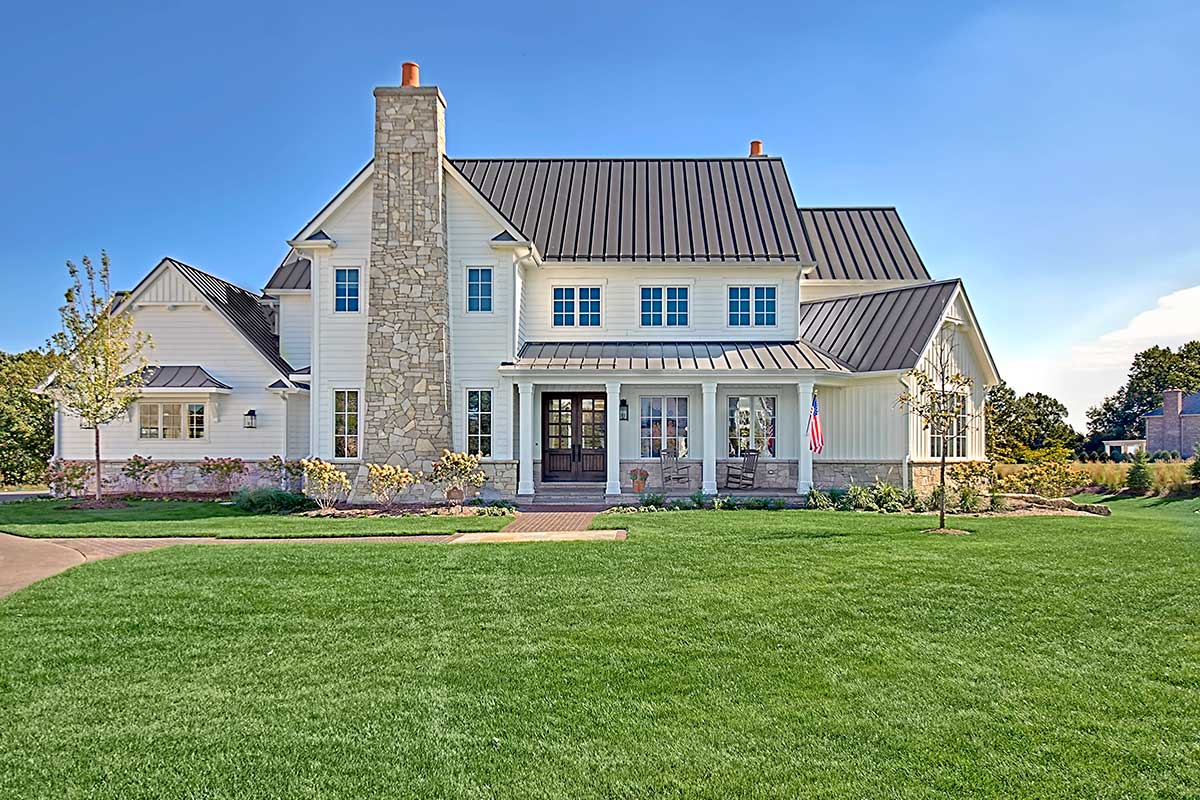 As far as design trends go is metal roofing one that will last and create an everlasting look?  I am asked this quite often, and well the short answer is, “Monticello, Thomas Jefferson’s home, still has most of its metal roof”.  In fact, it was a test bed for the University of Virginia buildings he designed.  There are numerous state and religious buildings in this country with metal roofs that lasted close to 200 years.  So is it a design trend? Personally, I have been designing roofs with metal, since the beginning.  Then, they were mostly design elements for bays and porches.  Lately, I use metal roofs on entire homes. They have good and bad points, so I thought I would outline a few of each.

45 standard colors along with custom options can be a daunting choice.

Besides the CoolRoof colors, which could save between 20-30% on electricity during the months when the AC is running, it has reflective properties to reflect radiant heat so the roof doesn’t absorb as much heat as an asphalt shingle roof .

Metal roofs are engineered for durability, and to withstand the abuses of extreme weather. A properly installed metal roof can easily rebuff most hurricane wind gusts, while asphalt shingle have a tendency to relocate themselves with wind speeds in excess of 70 m.p.h….some time as far as the next county.

Ice, hail, and even falling tree branches can dent it.  It is even possible to damage the roof by walking on it.

Most metal roof can last 2-3 lifespans of an asphalt shingle roof.

The biggest is the expense.  It can easily be 2 – 2.5 time the investment of a nice architectural asphalt shingle roof.  The metal itself vary the cost, as a galvanized metal roof is cheaper than aluminum and drastically cheaper than copper.

Metal roofs provide a sustainable alternative to asphalt shingle.  The metal can consist of up to 30% recyclable material, and is 100% recyclable when replaced 50+ years later.  Asphalt shingles (a petroleum product) go directly to landfills, and since it was replaced twice already, there is quite a bit of it there.

In terms of curb appeal, metal roofs are beautiful.  In a traditional, or even modern day farm house the look is classic, and enduring. If the biggest hurdle is the initial cost… or short term interest, then go with the cheaper materials.  However, if you are willing to invest in the rate of return on design, then I would consider either some or all of the roof becoming metal. According to Remodeling Magazine,  homes renovated with standing-seam metal roofing recoup on average 85.9-percent of costs nationally and up to 95.5% for homes in the Eastern states, These gains in resale value amount to 1- and 6-percent, respectively, over homes roofed with asphalt shingles.

Design trend or fad?  You can decide for yourself, but if it’s a fad, then it has been one for 100’s of years.

Fun Fact– In 1801, at the age of 65, Paul Revere established the first copper rolling mill in the United States in Canton, Mass. Among the first orders were $10,000 worth of copper sheathing for the navy and 7,675 pounds of copper sheets for the new State House in Boston. Revere’s son Joseph, who was his partner, went to England, Wales, France and Denmark to work as an apprentice to bring back technological skill and knowledge. This firm became known as Revere & Son.